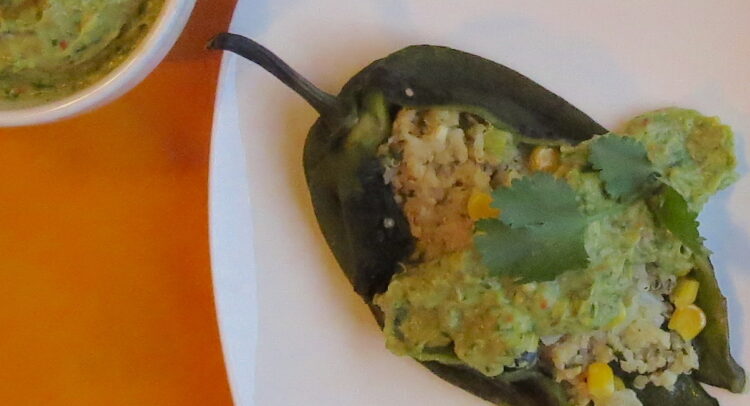 Poblano peppers – where have you been all my life? This was my thought when I found this recipe. So delicious!

This was inspired by a recipe featured on the daytime television show The Chew years ago. The show is no longer on the air, and unfortunately only some of their recipes are featured on a website through ABC television. The original recipe for this is not one of them.

I am so glad I had printed it out and saved it. (Which tells you how many times I have made it in the past few years. The really good recipes are the ones that get printed on paper.)

My main change to this recipe is using quinoa instead of rice. This gives you a meal that is lower in carbohydrates (by a little), but higher in protein and nutrition. However, if quinoa does not work for you, brown rice is a great option.

Other changes include leaving out the sour cream that was part of the original filling. I lean towards less dairy in recipes and don’t miss the sour cream in this flavorful, already creamy filling. I also added some diced zucchini to add another vegetable.

Poblano peppers are large in size – could be as long as an average banana and are milder than the average jalapeño pepper. People who know their peppers are likely familiar with the Scoville Scale. If you are wary of heat in peppers, this is a great tool to guide you. Basically, it measures a pepper’s spiciness or heat level. Poblanos are very close to the bottom of the scale.

If you want more information on the Scoville Scale, Isabel at Isabel Eats has a great post that gives you all the details.

If you have never roasted peppers, this may seem like a messy job – and it is – but it’s not difficult and the taste is worth it.

Topping the peppers with Chile Avocado Sauce finishes this dish.

Make it a meal!

Tools needed for this recipe: 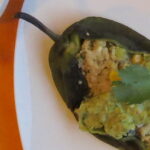 These Quinoa-Stuffed Poblano Peppers may look complicated, but steps are easy and you could have this on the table in an hour.

For the Poblano Peppers

Welcome to Let’s Make a Meal, Today! I am Laurie Kerr and I am here to answer the question: What’s for dinner? I am giving you the whole meal while we explore the world through food. Easy meals that are fresh, healthy, flexible and vegetarian. Come on! Let’s make a meal!

Read more about me...

Be the first to know about new recipes! Subscribe to our newsletter.